My dear acquaintance, it’s so good to know you
For strength of your hand
That is loving and giving
And a happy new year
With love overflowing
With joy in our hearts
For the blessed new year

The street below is empty of partying tourists and locals after hours and hours of firecrackers, pub crawl groups, backpackers singing, and revellers pouring from bars to smoke and talk outside. As I fell asleep around 3am I could still hear choruses of singing, yelling, whooping, and intermittent flashes and bangs of DIY fireworks.

Now, five men in high-vis vests sweep and pick up rubbish, with a small truck nearby full of brooms, bins, and bags.

It’s below zero at 11am. As the ice melts off the roofs of buildings, it almost immediately freezes again in a death-trap puddle on the footpath.

The sky was pale blue with webs of white clouds strung across it when we awoke and pulled the curtains aside. Now it’s almost completely white.

A young man in a black and yellow bee onesie with blue wings strolls down the street smoking a cigarette.

An older couple, rugged up against the cold, walk hand in hand.

Very few businesses will be open today. Most people poured into the shops yesterday to buy supplies for the New Year celebrations (champagne shelves cleared of all ‘dry wine’ options by 11am yesterday, leaving those late to realise to drink sweet varieties from the bottle by the river at midnight). We stocked up on cheeses, cold meats, bread, sweets, coffee, milk, mineral water, three bottles of wine (I bought the more expensive dry options, and we opened one at 1am and had a glass each) so if we decide to have a day inside today, we are set. And now I guess I have plenty of wine in the fridge to enjoy before we leave.

Thousands of people filled various squares in downtown Budapest last night. Out the front of the basilica we enjoyed hot rum punch and listened to music. Some of the Christmas market stores were open, but instead of selling their handcrafts or gourmet food, they were most enterprisingly selling champagne (the cheap options from the supermarkets), party poppers and hats, noisemakers and funny masks.

These cheap, $2-shop wares were being sold on the streets from trestle tables by just about anyone yesterday and all through the night. Using noisemakers and masks and wigs comes from old traditions or scaring off evil spirits:

“… cacophonous celebrations mean earsplitting horns, banging fireworks, and bursting firecrackers, but noisemaking actually derives from an ancient tradition: in the olden days, women used to get rid of evil spirits by making loud sounds and beating pots and pans around the kitchen at midnight as the fresh year began.” (More on NYE traditions here)

Entire families wore silly wigs, children wore masks, all of them honked horns and whistles – and these were not just tourists; locals too.

Tourists got into the spirit of things by buying and wearing headbands with devil horns, or Minnie Mouse ears with bows, or bunny ears, flashing and sequinned and garish, around town as they swigged from cheap bottles of champagne and smoked constantly.

By 11:45pm, thousands poured from downtown celebrations to the riverside and waited for a countdown (which didn’t happen), and an impressive fireworks display (which also didn’t happen). Everyone was checking their phones for midnight to arrive and when it did, cheers went up. All eyes looked to the iconic buildings along the river – the Parliament, the Buda Castle, Matthias Church, the Liberty Statue, the beautiful bridges that were heavy with people – waiting for a display of fireworks, but very little appeared. Anyone who has seen Budapest lit up by fireworks on the 20th August (a hugely important national holiday) knows what the city is capable of, in terms of putting on a show, but New Year’s Eve was about a tenth of that display. A bit disappointing.

Disappointment aside, I was glad to be with my Mister B, rugged up in layers upon layers, drinking hot rum punch by the river we love so much.

On the train the Vienna and there are Hungarian and Austrian authorities on board checking passports/documents — this has NEVER happened before on this trip!

BUT WAIT! The Hungarian guy has family in Melbourne, and the Austrian guy was so excited to tell me that he drove from Cairns to Melbourne 15 years ago and it was the best holiday ever. Meanwhile the three older Hungarian passengers in our booth were probably thinking, “who are these chatty foreigners?” 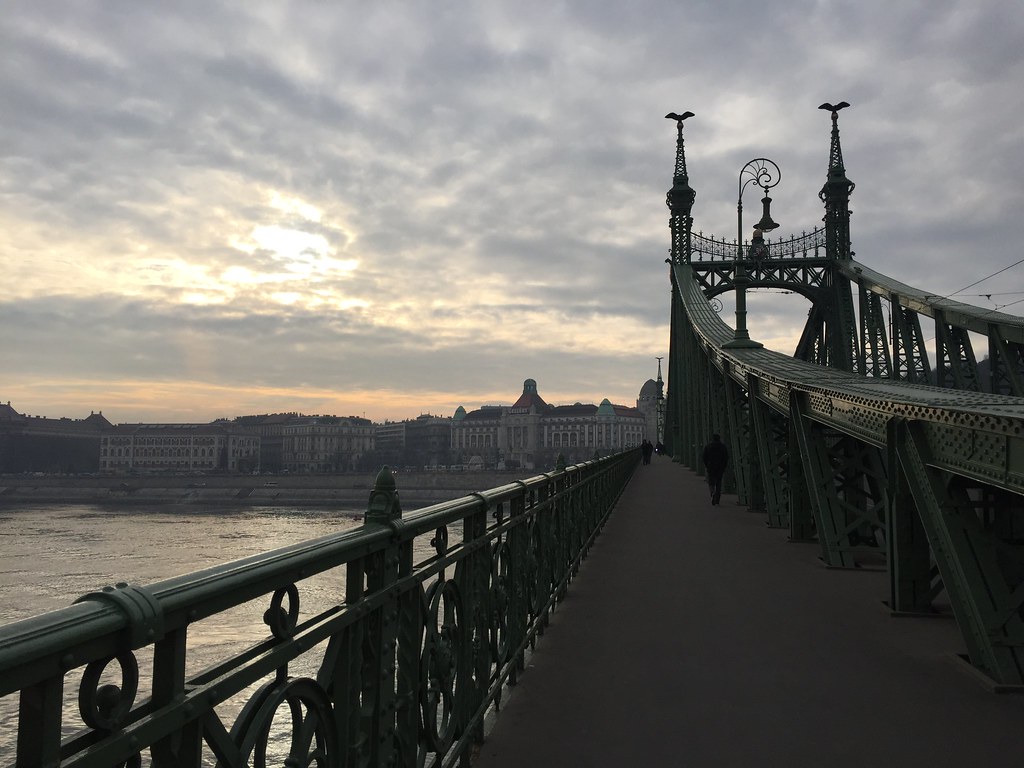 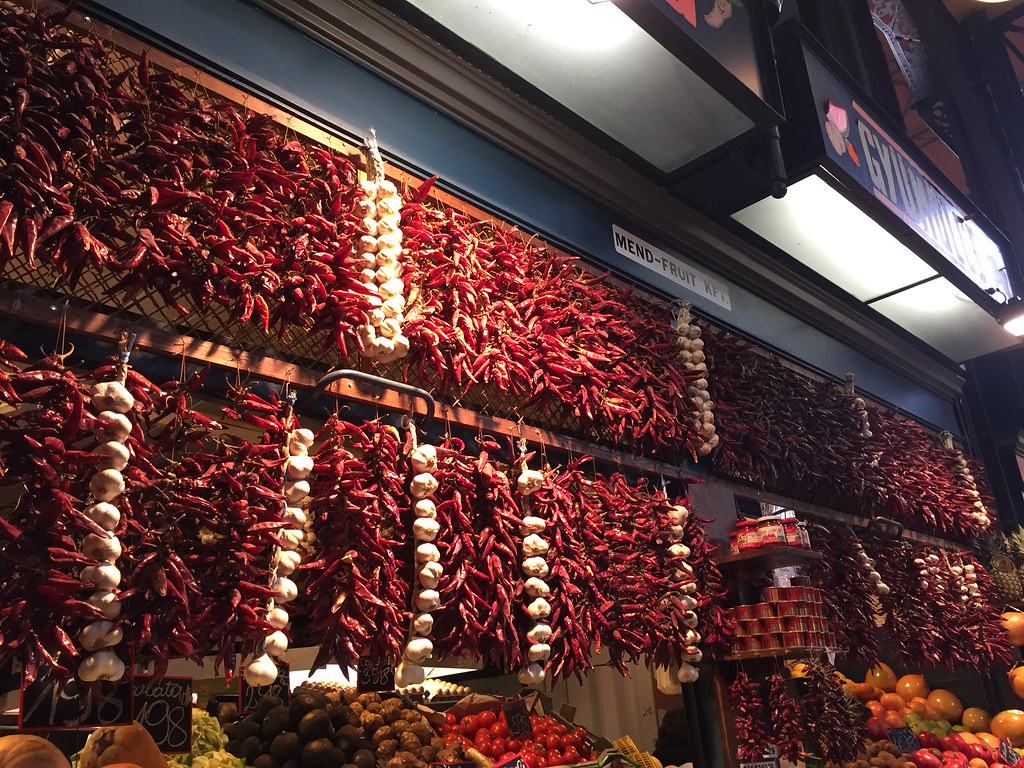 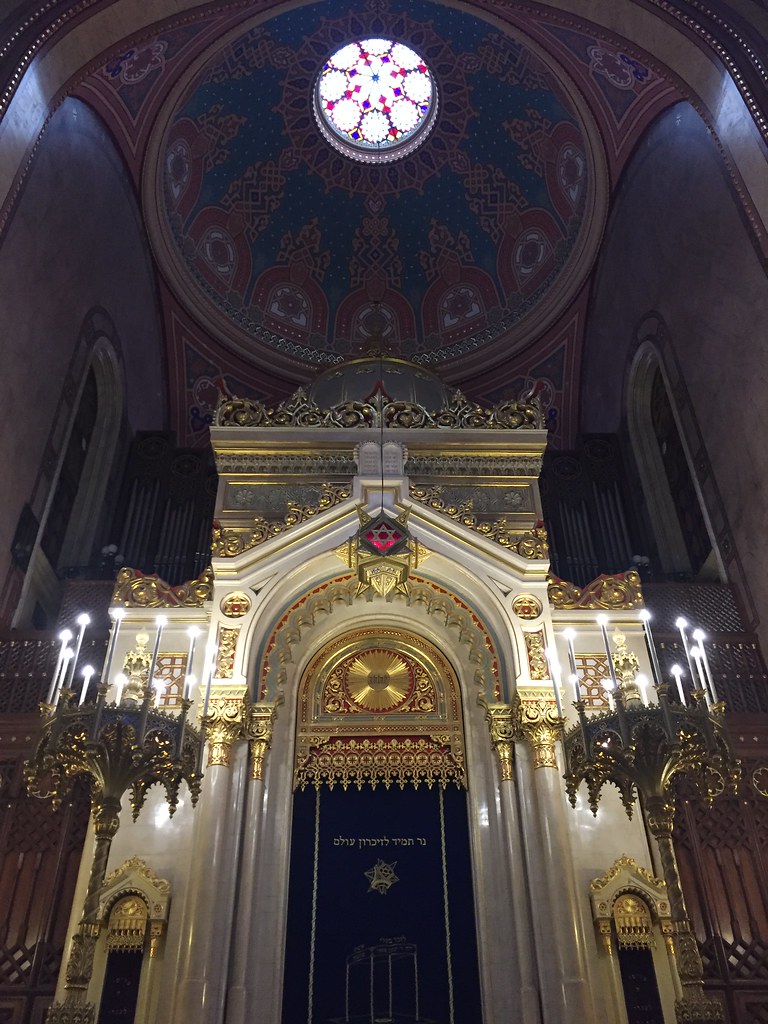 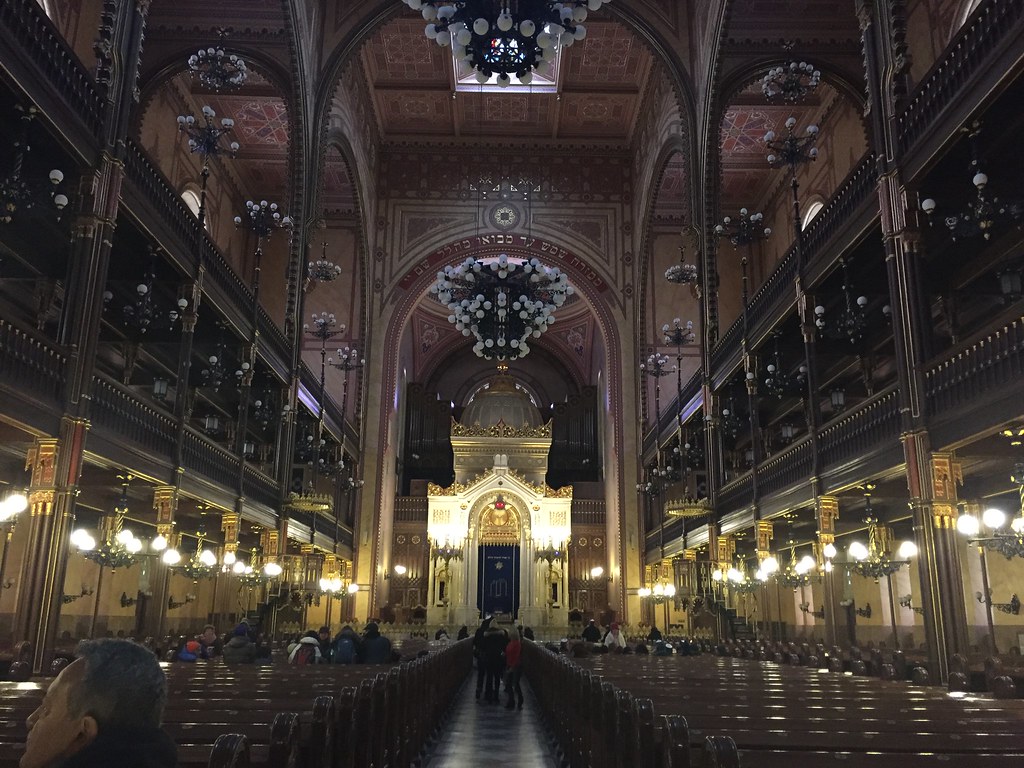 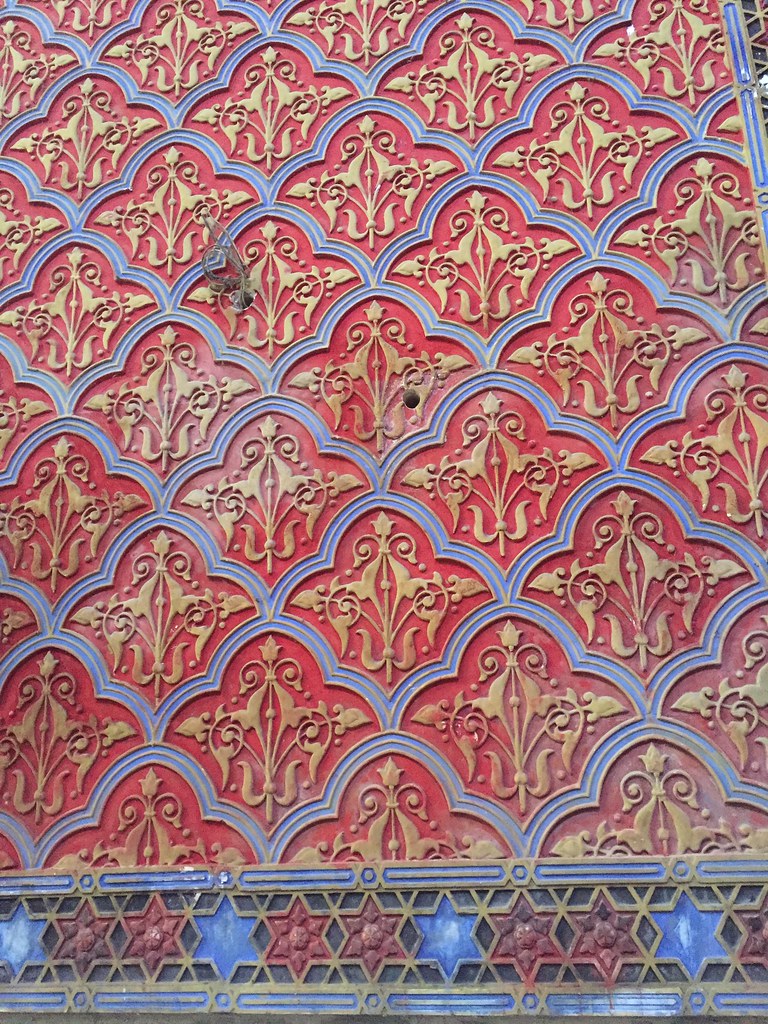 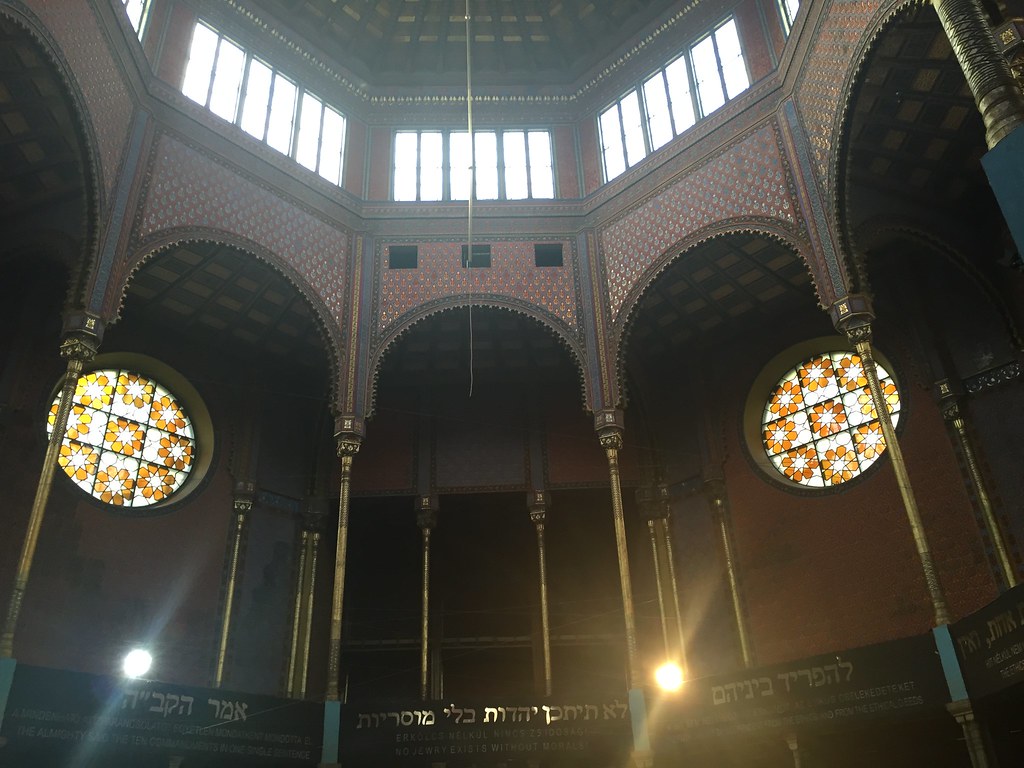 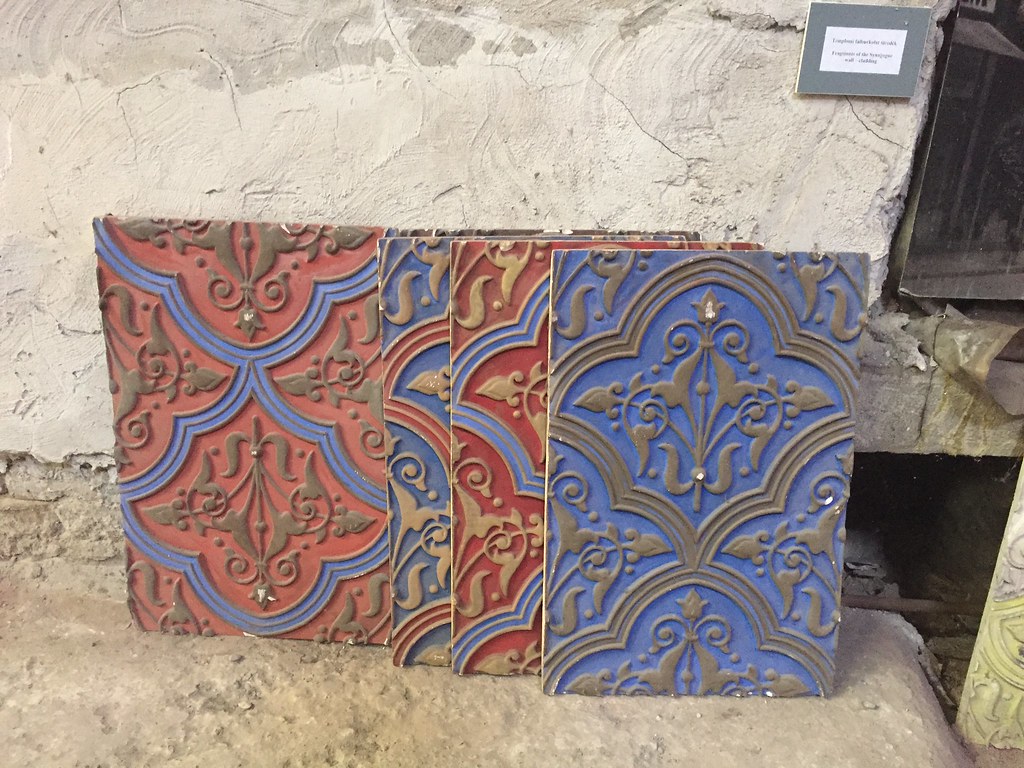 Parliament from the River Ride bus

The biggest synagogue in Europe

Stocking up on Mangalica pork

Coffee, beer and brioche at the market

Cooking up our finds from the farmers market. (Potato, pork, onions… Quintessentially Hungarian)

Yesterday we rode the amphibious bus “River Ride” around town and then INTO THE RIVER! Whilst it was a pricey excursion, it kept us warm and it was definitely amusing.

Take note of the moment in the video where the iPhone drops down from the windowsill of the bus and under the seat… Thankfully BK fishes it out for me and we return to regular programming as if nothing had happened. Smooth as!

I spent most of today snoozing because I have a cold (damn aeroplane germs) but we went for a nice evening walk around town again.

Deák Ferenc Ter & one of my favourite buildings

Warming up with a coffee